Each Monday we’re bringing you (and only you) script secrets from Bel Ami!

One thing we love about the Bel Ami screenplay is the mental images the writer paints for us. The scenes are beautifully described and you are clearly able to visualize the settings. It will be exciting to see how the script translates into reality on the silver screen. 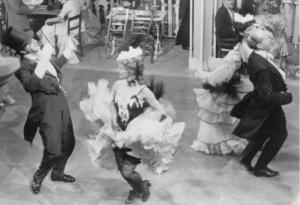 Inside, it is small and rough. There is a stage on which a woman is singing; before it, a dance floor packed with couples, and, around the walls, boxes for the richer customers. Some have their curtains half-drawn, obscuring what the men and women inside are doing. At the back of the theatre, the bar. Leaning up against it, two or three prostitutes, all in black chokers, dresses slashed to the waist. They are watching the entrance, waiting. They are what Georges has come looking for. He comes to the bar and takes out his two remaining coins. He plays with them in his hand for a moment. Eventually, the BARMAN comes to him. He throws one coin onto the bar.

He has one coin left. Standing beside him, watching him, is a prostitute, RACHEL. He smiles at her. She does not smile back. He perseveres, puts on his best smile, his most charming face. At last, a tiny response – but she is already leaving him, with a shrug, for the Fat Old Rich Man behind him who is offering her his arm.

In Bel Ami, the nightclub, The Gavotte, is located in Montmartre neighborhood of Paris. Montmartre is a factual place in Paris and has always been somewhat of a boho part of town and a  nightclub scene, even way back in the day. That is where The Gavotte nightclub (fictional) is located. The name Gavotte traces back to a 15th century style of dance. From what I have read it appears the Gavotte dance originated around 1400 in France and was considered a folk dance of the peasants. (The word Gavot translates into peasants.) Instead of the old side to side “white girl” dancing, the Gavotte is a dance where you repeatedly raise up your feet from the dance floor and interact with other dancers, similar to square dancing. Click here to see Gavotte-style dancing . I think the nightclub was named The Gavotte by the author because it lends itself to being the place where the less fortunate gather to dance and party.

Now that you know the origin of the club name, I’m sure you can imagine the scene as Georges walks in: people are dancing, men are smoking cigars and sipping cheap brandy, some are rollin’ VIP and making out behind thin curtains that shade private booths. Georges’ eyes go straight to the back of the club where all the hos are hanging out. NICE. Prostitution was legal in France during the era in which Bel Ami takes place.


I imagine the club similar to Moulin Rouge – earthy hues and red curtains, the three hookers dressed to impress with loads of makeup and va-va-voom dresses that show more than they cover. For a man-whore like Georges, it’s a feast for the eyes and he’s willing to spend his last bit of money just to hook up with one of these ladies for a quickie. Rachel, the prostitute that Georges is aiming to score with, has a sixth-sense when it comes to establishing which men have money and which don’t. She senses Georges is broke and walks away with a rich fatty.

So the question most likely on your mind now is: will he or won’t he shag a hooker? Join us next Monday and find out.

HOT in the Gavotte!

Georges in your BOX!